In a hurry and simply want a quick answer? Rikon 10-3061 is the best budget band saw you can get. Continue reading to find out why.

Whether you are a professional or hobbyist, the band saw is one of the most versatile power tools around. While top-tier models can also cost an arm and a leg, you don’t have to spend an outrageous amount of money to get a good band saw.

That is why this list presents the best band saws under $500, $300, and $200, highlighting what each one does best as well as detailing what to look for in a buyer’s guide. 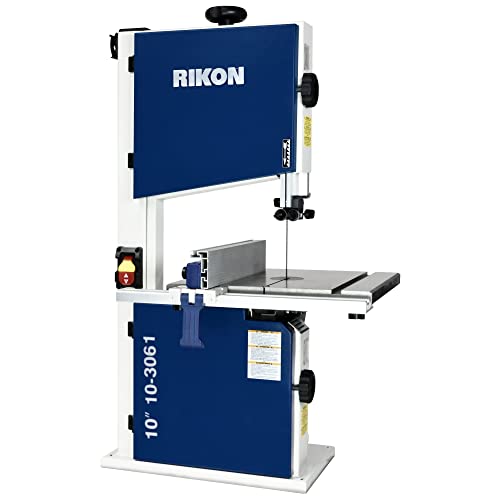 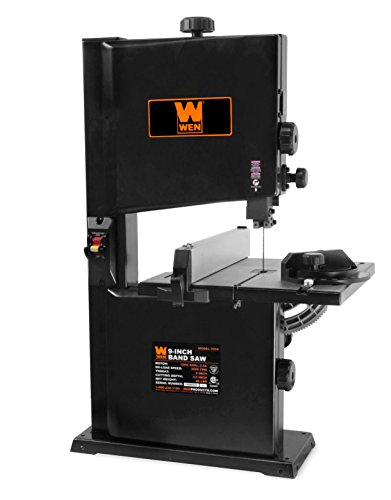 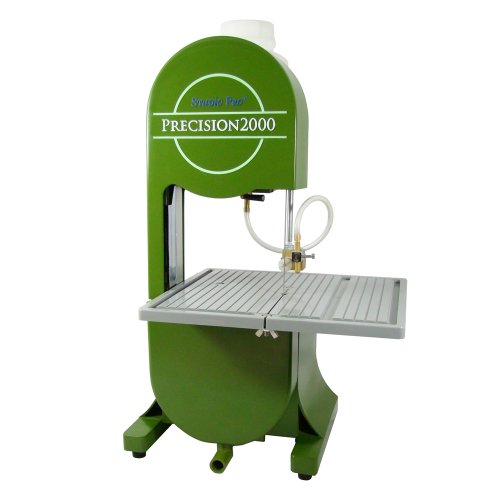 When it comes to cutting power, you should expect band saws under $500 to fall a bit below the line of higher-tier band saws. That said, cheap band saws within this price range can still cut most of the materials you expect, though you may have to feed the material much slower than with a more powerful tool.

While this tends to be one of the most important factors for larger band saws, it is also an important consideration for their smaller, less expensive cousins. However, you should understand that band saws under $500 will not be able to make the kinds of cuts more expensive models do.

Given that band saws under $500 cannot handle the largest, professional-grade tasks, it only makes sense to include extra features that consumer-grade markets will appreciate. One of the easiest and most useful set of features a band saw under $500 can include increasing its value is a solid fence and miter gauge.

After that, most other features end up being more “quality of life” improvements rather than functional upgrades, but a work light tends to be useful for amateurs and professionals alike. Outside of that, there are rarer features like a laser guide to help maintain accuracy and dust blowers to keep the workspace clear.

Surprisingly, the top-rated band saw on this list also comes from the least experienced manufacturer with Rikon being founded less than a decade ago. That said, the Rikon 10-3061 Deluxe Band Saw easily offers equivalent or better performance compared to other inexpensive models.

This band saw’s excellent performance begins with its motor which is the most powerful reviewed, generating ½ hp and pushing an impressive 5 ½ amps. To make full use of this power, the Rikon 10-3061 Deluxe Band Saw also runs its blade at the speed reviewed at 3280 FPM– perfect for dense hardwoods.

Even better, this band saw ensures that you do not need to limit yourself to just cutting wood as it sports a variable speed with a minimum speed of 1515 FPM. The Rikon 10-3061 Deluxe Band Saw further expands its versatility with a table that can not only bevel 45-degrees in one direction but 5-degrees in the opposite direction.

However, this band saw is not all great as these features and its performance depend heavily on the manufacturer’s quality control which is a bit hit or miss. On top of that, the Rikon 10-3061 Deluxe Band Saw is a relatively expensive model even on a list focused on band saws under $500.

Still, this band saw exceeds its competitors in other ways to ensure that, if you get a well-made one, you will not regret it– like with a good 5” resaw capacity. To further accentuate the Rikon 10-3061 Deluxe Band Saw’s capacities, its 13 ¾” x 12 ½” cast-iron table allows for a large maximum cutting width of 9 ⅝”.

Though it continues to grow its reputation, WEN is still not one of the more well-known companies on the market– despite almost 7 decades of experience. Part of this might be due to its focus on consumer-grade power tools, but this allows the WEN 3962 Band Saw to shine on this list.

For starters, this band saw boasts one of the more powerful motors reviewed, generating ⅓ hp and pushing 3 ½ amps– allowing it to more easily cut through denser hardwoods. However, you do not have to limit yourself to wood with the WEN 3962 Band Saw thanks to its variable blade speed that runs at 1520 FPM and 2620 FPM.

While still not a professional-grade band saw, this entry offers some of the best cutting capacities seen with a sizable resaw of 6”. As if that were not enough, the WEN 3962 Band Saw also boasts the widest maximum cutting width on this list at 9 ¾” thanks to the largest table measuring 14 ⅛” x 12 ½”.

To appeal to its consumer-grade market, this band saw also comes equipped with a flexible work light that helps illuminate your cut to maintain accuracy throughout. The WEN 3962 Band Saw also offers a bit of versatility with cleanup as its 3-in-1 dust port accepts vac hoses of 1 ¾”, 2 ¾”, and 4” in diameter.

While this band saw provides plenty of advantages over the competition, one area where it falls behind is in the precision department due to a preference for ¾” blades. It also does not help that, despite being a consumer-grade product, the WEN 3962 Band Saw can be more difficult to adjust than the competition.

WEN makes another appearance on this list, but instead of offering a high-end consumer-grade, cheap band saw that can keep up with professional competitors, it focuses more on value. While this approach carries with it some functional limitations, it does not hurt that the WEN 3959 Benchtop Band Saw is an inexpensive model even amongst the under $500 category.

That said, you have to give up a bit in order to save money, and this band saw sacrifices some of its power with a motor that only generates ⅓ hp and pushes just 2 ½ amps. On top of that, the WEN 3959 Benchtop Band Saw is another entry that only offers a single blade speed that runs at a decent 2500 FPM.

Still, you will not be able to cut the densest hardwoods or other materials as easily, but at least this band saw features a solid build made of aluminum and steel. It also does not hurt that the WEN 3959 Benchtop Band Saw fixes some of the other WEN’s problems by being significantly easier to adjust.

To further offer the intended consumer-grade market more value, this cheap band saw comes equipped with a decent fence and miter gauge. And if you do not have a large workshop, the WEN 3959 Benchtop Band Saw is easy to store, measuring only 29” x 19” x 14” and weighing in at just 40 lbs.

In terms of the cutting capacities, this band saw is a bit of a mixed bag with a smaller resaw capacity that tops out at 3 ½”, making it too short for resawing 2 x 4’s. However, the WEN 3959 Benchtop Band Saw boasts a 12 ¼” x 11 ⅞” table which affords it a decent maximum cutting width of 9”.

Of all the companies on this list, Grizzly Industrial, as the name suggests, is the only one that focuses primarily on professional to light industrial-grade products. That said, Grizzly is actually a fairly recent company with just under 40 years of experience to its name and a catalog that spans a variety of different construction fields.

However, these qualities do not preclude the Grizzly Industrial G0803Z Benchtop Band Saw from providing an otherwise solid hobbyist or amateur band saw. In terms of consumer-friendly features, none of the other products reviewed can even come close to offering what this band saw does.

For starters, the Grizzly Industrial G0803Z Benchtop Band Saw is the only model on this list that includes a laser guide to assist with making proper cuts. As if that were not enough, this band saw also comes with a flexible work light to further illuminate the workspace for accurate cuts.

That said, the Grizzly Industrial G0803Z Benchtop Band Saw still falls a bit short in the power department– even for a smaller, less expensive band saw. This band saw’s motor rates somewhere in the middle, generating only ⅓ hp and pushing just 2 ⅘ amps– reducing its effectiveness with dense hardwoods.

To further compound that issue, the Grizzly Industrial G0803Z Benchtop Band Saw also sees limitations with its cutting capacities where it offers the second-smallest cutting width reviewed at only 8 ⅞”. Likely better suited for smaller projects, this band saw will also not be able to resaw 2 x 4’s as its resaw capacity sits at 3 ½”.

Still, the Grizzly Industrial G0803Z Benchtop Band Saw makes up for these performance issues with further consumer-friendly features like a flexible dust blower to keep the workspace clear. Finally, you do not have to worry about the workspace as much as this band saw only weighs 42 lbs and comes with a carrying handle.

Studio Pro is likely one of the least known brands on this list, though the owning company, Diamond Tech International, has been around for over 3 decades. For those who think that smaller band saws are the purview of hobbyists and amateurs, Studio Pro answers back with a resounding “yes.”

However, just because a band saw is made for the hobbyist or amateur does not mean it is a poor product as the Studio Pro Precision 2000 Wet/Dry Band Saw demonstrates. Rather than focusing on a Mighty Mouse band saw, this entry attempts to offer something that can tackle a wide variety of different crafting projects.

This shift in approach is most notable in its wet and dry design, the only band saw reviewed to include such a feature, that allows you to cut a wide variety of different materials. Keep in mind, even other band saws on this list that can cut metal or stone still suffer from the heat generated by the blade.

The Studio Pro Precision 2000 Wet/Dry Band Saw, on the other hand, employs a similar feature as a tile saw with a water pump that maintains a cool blade temperature throughout the cut. Granted, as a craft-centric band saw, this model does not offer the same kind of performance found with brands focused on woodworking or metalworking.

However, the Studio Pro Precision 2000 Wet/Dry Band Saw is also extremely portable, tipping the scales at only 11 lbs and measuring 20 ½” x 12” x 10”. This not only allows you to use and store this band saw virtually anywhere in your home but it is easy to set up and put away at a moment’s notice.

Not the most powerful
Not the largest capacities

In the end, the best band saw under $500 will heavily depend on whether you need it for semi-professional tasks or just for smaller, hobbyist projects. Regardless, there is no getting around the fact that the Rikon 10-3061 Deluxe Band Saw is an excellent option for either endeavor.

Regardless of your task, this inexpensive band saw comes equipped with the power to handle it thanks to its powerful motor with ½ hp and 5 ½ amps. To maximize that powerful motor, the Rikon 10-3061 Deluxe Band Saw also boasts some of the best cutting capacities with a 5” resaw and 9 ⅝” maximum cutting width.