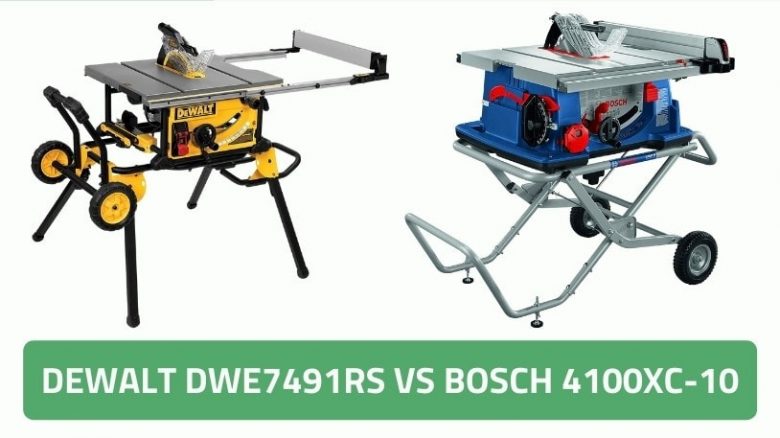 Both saws are manufactured by well-known and respected brands and I’ll be looking at their strengths and weaknesses. We’ll identify which saw offers the best value for money and highlight the different mission profiles suitable for each.

I must make a disclaimer here; I like both of these brands. I owned a DeWalt for many years, and many of my power tools are Bosch. This article is a bit like asking a parent to choose which of their children is their favorite. However, each will be better for one application than the other, and it’s those differences we’ll be exploring today.

Come with me for the next few minutes, and we’ll dig into the specifications behind these two table saws and give you reliable data upon which to base your buying decisions.

There’s not a huge price difference between these table saws, but if budget is your main driver, then the DeWalt DWE7491RS Table Saw is your choice. It is a bit cheaper and it’s a good honest bare-bones saw, particularly for newcomers to woodwork. It also has a couple of nice features the Bosch lacks.

However, the Bosch 4100XC-10 Table Saw offers a couple more bells and whistles for the extra price that you won’t get on the DeWalt. Depending on your specific use, these may more than justify the extra few dollars.

Both of these saws are aimed at the job site and advanced home user category. Both have decent 2.4 horsepower motors, which, when coupled with the 10-inch blade, give you all the grunt you need for general cutting and ripping work.

We won’t spend time on the similarities of these saws; instead, let’s take a look at the eight differences and whether they might matter to you when deciding on a purchase.

While the DeWalt has a higher blade rpm than the Bosch, does it really make a difference? For an in-depth look at this subject, refer to this article. However, for a quick answer, the speed range for a cutting tooth when general woodcutting is approximately 130 to 170 feet per second. The 4,800 rpm of the DeWalt blade gives you a cutting speed of just over 200 feet per second, while the 3,650 of the Bosch gives you 159 feet per second.

The DeWalt sits just above the range while the Bosch sits smack in the middle. Does it matter? Not hugely, although given the two models have the same horsepower engine, the DeWalt might be said to have the edge. Personally, it wouldn’t affect my buying decision.

DEWALT DWE7491RS has slightly higher blade RPM but it’s not something that should affect your buying decision.

The DeWalt has a rip capacity of 32-½ inches compared to the Bosch, which can extend to 30 inches. Most of us have a need to rip an 8’ x 4’ sheet in half at one stage or another, so if the rip-fence goes past 24 inches then that’s good. Anything else is a bonus.

However, if you regularly rip sheets for panelling up a house, every inch counts. In this comparison, DeWalt wins with that extra 2-½ inch capacity.

The DeWalt does not explicitly state the full bevel capacity of their saw, although they do mention not to take the blade beyond 45 degrees with the blade guard attached. The Bosch specifications cite a capacity from -2 degrees to +47 degrees. When cutting bevels, extending a degree or two beyond 45 degrees is useful to ensure an exact fit if creating miters.

With the leeway offered by the Bosch, I’m giving it the edge in this comparison.

A blade brake on a table saw is a nice feature. When you have repetitive cuts requiring adjustments to settings, that time you wait for the blade to stop adds to a lot of lost time by the end of the day. A blade brake rapidly stops the blade, allowing you to get on with what you’re doing.

The Bosch has this function while the DeWalt does not, so Bosch wins this one hands down.

Bosch 4100XC-10 has the blade brake function while the DEWALT does not.

What’s the benefit of the soft starter on an electric motor? When a motor starts, it draws 4 to 7 times the current it uses when normally operating while trying to spin up to cutting speed. This substantial current inrush causes high torque and added wear to the motor. The soft starter on the Bosch increases the current slowly, reducing torque on the motor, in addition to any current fluctuations for others using your power circuit.

The inclusion of this feature by Bosch increases motor life by reducing wear and tear on the windings within the motor. Such an inclusion is a great initiative, and with DeWalt not providing this function, Bosch is the winner.

Bosch 4100XC-10 includes the soft-start while the DEWALT does not.

The DeWalt has added a nice touch with the easy one-step removal of the riving knife. The riving knife is the metal ‘shark-fin’ that sits behind and hugs the blade for those new to woodwork or table-saws, and it often holds the blade guard. This knife is a safety device that stops the cut from closing behind the blade, pinching it, and causing a dangerous kickback.

In the old days, I would have to be standing on my head in sawdust with a hex wrench if I needed to remove the riving knife for any reason.

DeWalt has made removal a one-step process on this model by pulling a handle and lifting the riving knife. Full marks to DeWalt on a nice touch!

Bosch has included anti-kickback pawls mounted onto the riving knife. These little gizmos are effectively toothed cams, allowing you to push the wood in the direction of the cut as they ride on the top surface of the wood. However, should the wood try to move back toward the saw operator, as in a kickback scenario, the cams dig into the surface of the wood, holding it down onto the tabletop and resisting the movement.

They’re a helpful safety feature and require little to no attention from you, other than making sure they pivot freely from time to time. DeWalt hasn’t included these, so Bosch gets the edge with this feature.

Anti-kickback pawls are included with the purchase of the Bosch 4100XC-10 table saw.

A good rip fence has three mandatory requirements. It must be parallel to the blade to ensure accurate cuts, adjust smoothly, and when locked in a new position, it must maintain a square and parallel cut.

The rip fences provided with both the Bosch and the DeWalt meet these minimum requirements. However, both go a step further with extra features, which are very convenient to have.

Both have a mechanism presenting a thinner edge for narrow rip cuts. Using a full face rip-fence for very narrow rip cuts tends to pinch the offcut between the moving blade and the fence face, trapping the wood and throwing the offcut back toward you. With this design, the smaller fence edge allows the offcut to drop to one side, reducing the tendency to kick it back. Also, it’s easier to get your push stick onto the edge of the wood.

The second feature is sheet support. When you’re cutting a sheet and the fence is extended out into mid-air, the sheet support mechanism will support the sheet edge at the same height as the tabletop, keeping the sheet stable throughout the entire cut.

Bosch provides the first feature, with an extrusion you can screw on to safely make narrow rip cuts. Unfortunately, the large knuts used to screw the extrusion onto the fence do not provide the second helpful feature of the sheet support. Also, I would find the process of screwing the extrusion on then removing it again to get tiresome fairly quickly.

On the other hand, DeWalt has a slick little mechanism that flips over to provide both features at once and flips back when no longer needed. It’s a nice touch that shows a lot of thought has gone into the design, and DeWalt takes the prize on this feature.

DEWALT has put more thought into the design of the rip fence on their table saw.

There’s nothing worse than trying to rip a long piece of wood and have it waving around in the air as you approach the end of the cut.

Bosch includes an outfeed extension on their saw.  This extendable support at the back edge of the table helps support the wood as it passes the blade and extends beyond the rear of the table while cutting. While you’ll still need to set up rollers or trestles if the plank is excessively long, for middling-size pieces, having a support that you can pull out quickly keeps you productive for longer.

DeWalt offers this feature as an optional purchase rather than as part of the purchase. I like what Bosch has done here, and the points go to them on this feature.

The challenge when designing a tool is to give the average user all the things they need, and none they don’t. On balance, I’m giving the crown to DeWalt. As an overall package, it offers the best value for money while providing a wider rip capacity, a quick attach/removal riving knife, and the flip-over auxiliary rip fence. In my book, these items support efficient working at a friendly price-point for home users.

The DeWalt is for those seeking a table saw meeting advanced home user woodworking needs while being gentle on the pocket.

The Bosch has a few nice inclusions, but I’m not convinced they are essential to the infrequent uses of the home woodworker. The soft starter and the blade brake are great for jobbing carpenters or builders on a construction site. Professionals’ high use and frequent stop-starts make these two features attractive, with the soft-starter giving saw longevity and the blade brake greater efficiency and safety.

On the downside, it’s disappointing that Bosch hasn’t come up with their answer to DeWalt’s flip-over auxiliary fence, as professionals really can’t be bothered mucking around with bolting and unbolting extrusions. In my books, that’s a significant omission I’d be encouraging Bosch to address.

DeWalt and Bosch are two of the greatest table saws out there. As always, your choice comes down to two important considerations; the money you wish to spend and the use you intend for the table saw.

For home woodworkers, I suggest buying the DeWalt DWE7491RS to lock in this price. It’s a good brand, with reliable backing for spares, and it’ll do everything you need it to with a few excellent additions to make your life easier.

For professionals, I’d rush to buy the Bosch 4100XC-10. Once again, a great brand with good after sale support. It has features that will make you more efficient while assisting you to get maximum life from your saw. Also, that big tabletop is a bonus.