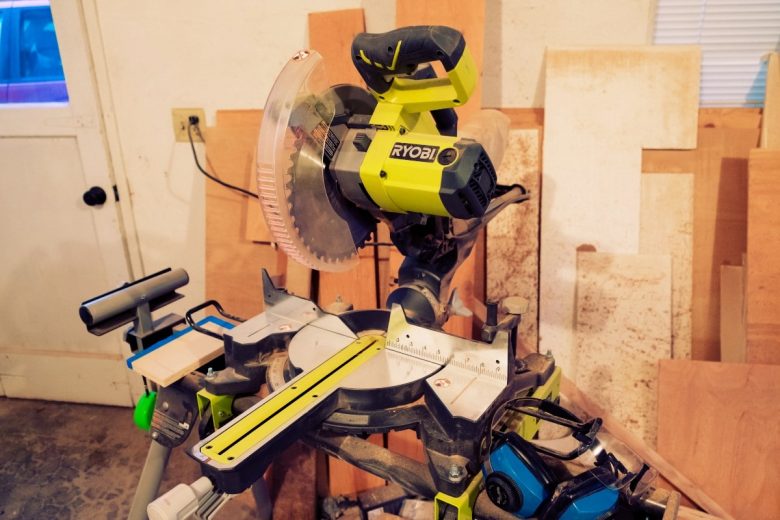 In a hurry and just want to get a quick answer?

Ryobi ZRTS1345L is the best Ryobi miter saw you can buy. Keep reading to find out why.

When looking for a miter saw, it can be difficult to figure out which brands offer the best combination of features at a great value. Ryobi power tools are an excellent option that offers great performance at a reasonable price, especially when you compare them with other power tools in the same price range.

One tool that can be especially tricky to choose is the miter saw given that it comes in a number of different varieties that suit different skill levels. In this Ryobi miter saw review, we will look at the 5 best miter saws from this brand, highlighting what each one does best. 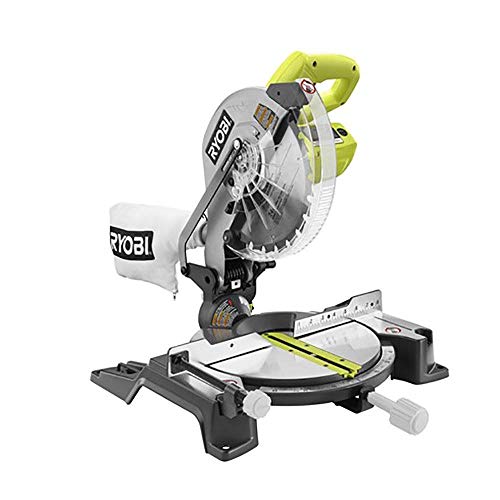 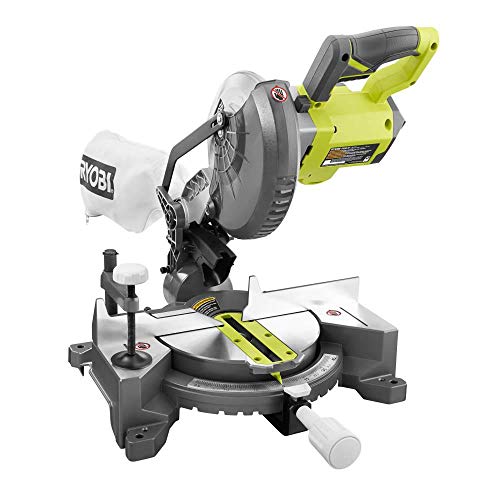 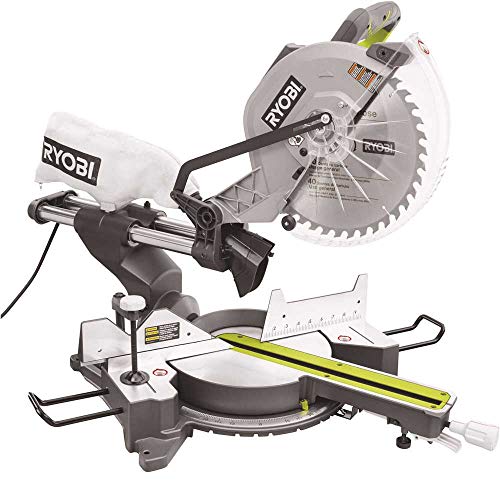 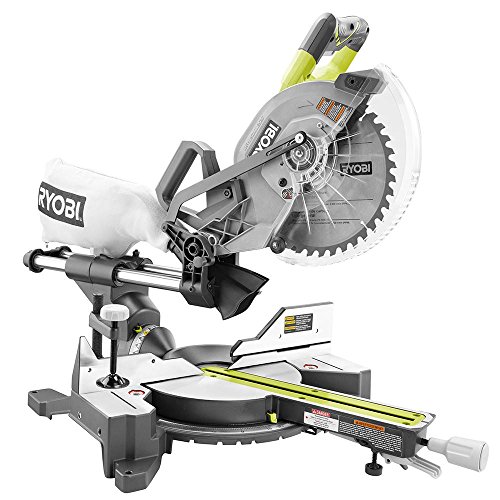 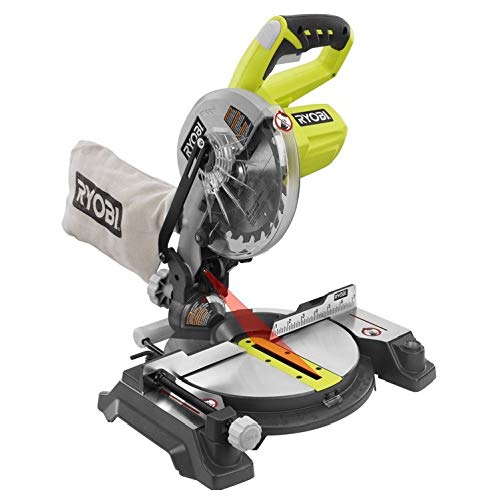 As a brand, Ryobi has been around since 1943 which provides ample experience to help ensure that they produce high-quality power tools. That said, Ryobi is not a professional-grade power tool manufacturer, instead focusing on consumer-grade options.

However, Ryobi started as a die-cast company which is likely why they provide superior durability compared to other consumer-grade power tool manufacturers. While they make all kinds of power tools, Ryobi pushes their cordless models more thanks to the versatility of their ONE+ lineup that allows the use of ONE+ batteries for all of their cordless power tools in the line.

Keep in mind, while Ryobi might technically be more of a “consumer-grade” power tool manufacturer, it sits at the top of the consumer-grade with many models entering the mid-tier. That said, Ryobi is well-aware of their own quality and prices their products accordingly, though they are generally still less expensive than professional-grade brands.

While this is not always the most important aspect when choosing a power saw, miter saws tend to require a bit more power than others due to the number and type of cuts they make. For one, miter saws almost exclusively make cross cuts which require more cutting power than other types of cuts.

This is arguably the most important set of qualities on a miter saw as it ultimately determines and limits the type of workpieces you can cut with the saw. That said, there are many different ratings to consider though the maximum crosscut width is likely the most important as it will come up more often.

After the crosscut width, you will also want to make sure that your miter saw can cut through thicker materials determined by the maximum cutting depth. After you cover those two primary cutting capacities, you can break ties between otherwise equal options with maximum cut depth when cutting 45º bevels.

The Ryobi ZRTS1345L Compound Miter Saw makes its mark on our list primarily by offering some of the best specs combined with an inexpensive price. For instance, this miter saw comes with a 14-amp motor that spins its blade at a blistering 5500 RPMs– the fastest cutting blade on our list.

As if that were not enough, the Ryobi ZRTS1345L Compound Miter Saw also comes with a laser guide to ensure that you know where the cutline is regardless of the working conditions. However, that is the only advanced feature on this miter saw as it only offers a single bevel and does not allow for a sliding arm action.

Surprisingly, the absence of a sliding arm action does not impede it though as it still boasts a great maximum crosscut width of 6” and a list-tying maximum cut depth of 3 ½”. On the other hand, Ryobi no longer makes the Ryobi ZRTS1345L Compound Miter Saw which requires you to purchase it refurbished.

The RYOBI P553 Cordless Compound Miter Saw is the first cordless model on our list and is extremely inexpensive considering it is cordless. Of course, this cordless miter saw suffers from the same lack of power compared to corded miter saws– though it comes far closer than most to meeting that mark.

The main issue with the RYOBI P553 Cordless Compound Miter Saw comes with its capacities which are some of the smallest in this Ryobi miter saw review at 2” for maximum depth and 4 ½” for maximum crosscut width. One interesting quality of this miter saw is that it tends to be much quieter than the others likely due to the cordless design.

Another great aspect that the cordless design imparts is that the RYOBI P553 Cordless Compound Miter Saw is far more portable than most. This is especially true when you consider it only weighs 21 ⅖ lbs making it the second-lightest option on our list– though it too lacks some of the advanced features found elsewhere.

The RYOBI TSS120L Sliding Miter Saw is easily the most impressive miter saw in this review in terms of pure capability, but you will have to pay a pretty penny for it. Though, if you do, you will not be disappointed as it roars with a 15-amp motor that can cut under load better than any other entry on our list.

As if that were not enough, the RYOBI TSS120L Sliding Miter Saw also boasts a 13 ½” crosscut width to pair with a 3 ½” maximum cutting depth for the largest capacities reviewed. On the other hand, the corded design combined with its extremely heavyweight of 53 lbs means you will likely not be taking it anywhere.

Still, the RYOBI TSS120L 12″ Sliding Miter Saw comes with extra features like the ever-popular laser guide, so you know where your blade will cut. Even better, the sliding arm action allows for small rip cuts while the double-compound design allows you to make bevel cuts on either side of the workpiece.

The Ryobi P3650B Cordless Sliding Miter Saw is a bit of a mixed bag in that it offers plenty of advanced features but does not perform quite as well as you might hope. Part of this comes down to the fact that the cordless motor cannot compete with corded ones or even superior cordless motors.

While the blade speed of 4000 RPMs is more than suitable, the Ryobi P3650B Cordless Sliding Miter Saw bogs down when under load too often. Thankfully, this miter saw features a sliding arm action and a double-compound design to allow for rip cuts on small workpieces and easier bevels.

Even better, this approach also provides the Ryobi P3650B Cordless Sliding Miter Saw some of the best capacities on our list with a maximum cutting depth of 3 ½” and a crosscut width of 12”. Unfortunately, you do not get all of these specs and a cordless design without paying for it– quite literally in this instance.

Our final entry is the Ryobi ZRP551 ONE Cordless Miter Saw which sits in a bit of an odd spot in terms of who it is best for, though professionals cutting trim is the most likely answer. One main issue with this miter saw is its cordless motor cannot compete with corded or more powerful cordless options.

Granted, it still spins the blade at a quick 4500 RPMs allowing the smaller 7 ¼” blade to make short work of smaller workpieces. Unfortunately, you do not have much of a choice in this regard as the Ryobi ZRP551 ONE Cordless Miter Saw also has the smallest capacities reviewed at 1 ½” for maximum cutting depth and a 4 ¼” crosscut width.

Thankfully, this miter saw is not only cordless but extremely lightweight, tipping the scales at only 15 lbs and easily being the most portable option on this list. It also does not hurt the Ryobi ZRP551 ONE Cordless Miter Saw features a laser guide for precise cutting and a reasonable price.

I hope this Ryobi miter saw review helped you select the best miter saw for your skill level and budget. That said, the Ryobi ZRTS1345L Compound Miter Saw stands a bit above the rest in terms of overall value assuming you are at least a moderately experienced user.

In terms of cutting power, this miter saw offers the second-most power with the fastest speed, making it perfect for cutting through even the densest of hardwoods. On top of that, the Ryobi ZRTS1345L Compound Miter Saw comes with a laser guide to ensure that you make the right cut every time.

While it may not be the most advanced model on our list, it still offers a bit more portability than you generally find with a corded model thanks to its lightweight build. It also does not hurt that for a non-sliding miter saw, the Ryobi ZRTS1345L Compound Miter Saw offers excellent cutting depth and a solid crosscut width.

DeWalt DWS780 Review. Should You Buy This Miter Saw?