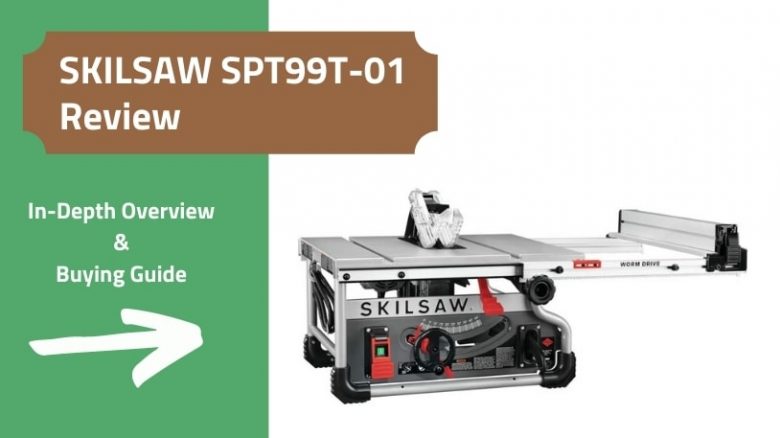 Today’s table saw review is for the SKILSAW SPT99T-01 Portable Table Saw that runs an 8-1/4 inch blade driven through SKILs legendary worm-drive gearbox. We’ll look at the SPT99T-01 for quality, capability, and value for money while comparing it against a few of its contemporaries.

I’ve learned in over 30-years of woodworking that your choice of table saw can push the quality and accuracy of your woodwork to new heights or be a constant source of frustration and irritation due to poor design, quality, and capacity. My goal is to give you objective advice to help you buy a table saw that meets your needs and budget without causing buyer’s remorse.

My review suggests that SKIL has a quiet, compact performer here, offering a capable table saw with excellent design features at a reasonable price. I feel the SPT99T-01 is a good purchase for a newcomer to woodwork, particularly if you’re looking for serious power in a compact footprint.

Stay with me to learn the specific advantages and disadvantages of owning this table saw.

Included In The Package

At first glance, the SKILSAW SPT99T-01 looks like a smaller and stripped-down version of its big brother, the 10-inch SPT99 Jobsite Table Saw (full review here). While that may be true, it’s not all bad when you consider that although big brother comes with a few more bells and whistles, it’s also around $200 more expensive.

I’m pleased to see that the strengths I liked about the larger saw are included in the SPT99T-01. Designed for home woodworkers or jobbing carpenters and builders who travel and work onsite, this saw is designed for cross-cutting and ripping softwood, hardwood, plywood, and composite wood materials.

There’s not much to dislike about the SKILSAW SPT99T-01. A compact and genuinely portable table saw with power to spare. It doesn’t ship with a stand, but one is available for purchase if required. Professionals who use this table saw speak highly of it and prefer it to many others they’ve used in the past – to me, that speaks volumes.

While this table saw is slightly more expensive than some of its competitors, you’re paying for that extra torque from the worm drive gearbox. In my book, it’s worth the small premium.

I have a sneaking admiration for the SPT99T-01. Do you know those nuggety little pit ponies that hauled coal in the mines? Well, this saw reminds me of them, as it may be small, but it packs a whole lot of power and capability into a tiny frame. Let’s discuss the main features.

The SPT99T-01s brother sported a 10-inch blade and a 2.4 horsepower motor and had power in reserve; well, our little pit pony has an 8-1/4 inch blade driven by that same motor.

The other pleasing inclusion is the worm-drive gearbox that SKIL appears to be making standard on its table saws. A worm drive is a gearing system where the motor spindle is the worm shaft, which drives a worm wheel. This gearing takes a higher rpm motor and slows it through the worm drive, lowering the rpm at the blade but supplying a higher torque. Torque is the rotational power or force supplied to the cutting teeth of the blade. The more torque at the cutting tip, the harder the wood you can power through without bogging down the saw.

This saw may have a smaller diameter blade, but with that power and torque, there won’t be many kinds of wood you can throw at this table saw that will cause it to falter. SKIL gets 10-points from me on this feature.

The SPT99T-01 has a rip capacity to the right of the blade, using the fence, of 25 inches. Twenty-five inches is adequate for ripping large sheets. When ripping an 8′ x 4′ sheet down the center, a table saw needs to allow a 24-inch cut, and it has an inch to spare with our example. For a saw of this small size, that’s not bad.Rack and Pinion Fence Adjustment

Although standard now on the better brands of table saw, it’s worth mentioning that the lower price of this saw does not mean that SKIL has cut corners on important features. The rack and pinion drive ensures that the fence positioning is accurate and parallel to the blade wherever you may stop it, within the 25-inch range mentioned above.

SKIL has included an auxiliary thin fence edge on the SPT99T-01. This additional section is a mechanism that flips over to present a thinner edge for narrow rip cuts. When you’re using the full face rip-fence for very narrow rip cuts, you can nip the offcut between the moving blade and the fence face, and this can jam the wood, causing the blade to throw the offcut back toward you.

When using the thinner fence edge, the offcut can drop to one side, reducing the tendency to kick it back. The extra space between the blade and the fence also makes it easier for you to get your push stick onto the wood’s edge.

A further advantage of this auxiliary fence edge is that when you extend the fence beyond the edge of the table, you can flip it down to support the edge of the sheet you’re cutting, making it safer and more stable when handling large sheets.

The SKILSAW SPT99T-01 includes anti-kickback pawls in the package, which is a nice bonus. Consisting of toothed cams, anti-kickback pawls allow you to push the wood in the direction of the cut as they ride on the top surface of the wood. Yet, if the wood tries to come back toward the saw operator, as it would in a kickback scenario, the cams dig into the surface of the wood, pushing it onto the tabletop, preventing the movement.

You may be disappointed the SPT99T-01 doesn’t have a foldable rolling stand like its siblings, although you can buy one should you wish. The reason, however, is that this saw is actually portable, weighing in at half the weight of its big brother. The SKIL 10-inch equivalent table saw weighs 94 pounds, while our 8-1/4 inch model weighs either 44 or 51 pounds depending on which SKILSAW site you read. You can pick this saw up and carry it to your truck or garage storage at that weight.

There’s not too much to pick between the DeWalt DWE7485 and the SKILSAW SPT99T-01 other than price. The Dewalt is almost $70 cheaper, has a slightly narrower rip fence cut width of 1/2 an inch and a shallower depth of cut at 90 degrees of 1/8-inch.

You get a similar package; however, where the SKILSAW SPT99T-01 wins hands down is the worm drive gearbox giving a significantly increased torque to the blade. If you are cutting hard timber or constantly doing maximum depth cuts, the SKILSAW might be worth the extra dollars. If you only cut softwoods and sheets and have a limited budget, then the DeWalt DWE7485 will be your pick.

There are a couple of differences between the Milwaukee 2736-21HD and the SKILSAW SPT99T-01, and first, we should mention the price. The Milwaukee is a bit more expensive than the SKILSAW offering.

That’s understandable when you realize the Milwaukee is powered by a lithium-ion battery, forming part of the Milwaukee M18 battery platform for cordless tools. It also comes with a blade brake and the Milwaukee one-key proprietary track and control system that allows you to monitor your saw location via your smartphone, allowing you the option of disabling it remotely.

My opinion is that unless the cordless system or blade brake is important to you, the SKILSAW SPT99T-01 beats the Milwaukee on most metrics that matter. You’ll pay less and get more torque, greater cut depth, and a wider rip fence cut capability.

The SKIL provides a greater depth of cut from the 10-inch blade and gives another 1/2-inch rip fence cut capability. Interestingly, it has what SKIL calls a ‘micro-adjustment’ to parallel the blade with the fence accurately. It also has a foldable stand where the SPT99T-01 doesn’t, but it doesn’t have the worm drive gearbox that the SPT99T-01 does while having a slightly larger footprint.

Those differences aside, the prices are similar, with the SKIL usually a few dollars less.

In this comparison, you need to decide whether the 10-inch blade, fold-out stand, and 1/2-inch extra rip width offset the higher torque and smaller footprint of the SPT99T-01. If you’re working on a job site, the SKIL TS6307-00 table saw can be the best choice, whereas if you’re in a home workshop, the SKILSAW SPT99T-01 might better suit your needs.

Each decent table saw you look at comes with pros and cons, and the SKILSAW SPT99T-01 is no different.

On balance, you pay a slight premium for higher torque and receive a decent cut depth and rip fence cut capability. This saw offers a compact footprint, great power, and has a few nice design features. A nice table saw for a workshop or job site; I feel you can’t go wrong purchasing the SKILSAW SPT99T-01 Portable Worm Drive Table Saw.