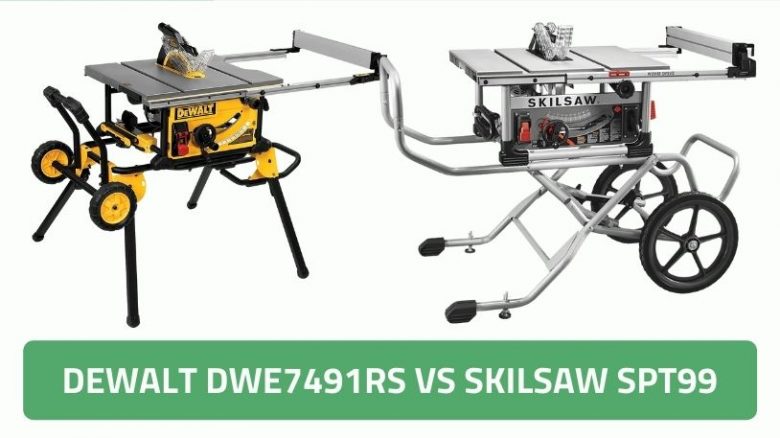 Today’s comparison is between two serious brands, with the chosen table saw models the SKILSAW SPT99 vs. Dewalt DWE7491RS.

We’ll look at the designs, capabilities, and accessories and select the table saw providing the best value for money while identifying the different uses suited to each.

Frequent readers will know that I owned and enjoyed a DeWalt table saw in my earlier woodworking days, and it would be fair to say I have a soft spot for the brand. Yet, my first circular saw was a SKIL, and I still have it today, so I have the greatest respect for both companies and the quality of their products.

Give me a couple of minutes of your time, and I’ll run you through the advantages and disadvantages of each table saw, giving you the information you need for an informed buying decision.

The price difference between these two saws is not huge, with the SKIL table saw slightly more expensive than the DeWalt. However, I think you’re getting a lot of bang for your buck with the SKILSAW SPT99-11, and I’ve selected this table saw as providing the best value for money. Those few extra dollars buy you some valuable features, enhancing capability, safety, and convenience.

A point to note. SKIL markets the SPT99 series as either a -11 or -12 model. The difference? It’s the supplied blade, with SKIL using the SPT99-1 to describe the saw model and the last dash number to describe the blade. A 1 signifies a 24-tooth carbide blade, and a 2 a 30-tooth Diablo blade, tipped with titanium cobalt. It’s beyond the range of this article to discuss the difference but in short? It’s a matter of personal preference.

Yet, there are features on the DeWalt you won’t find on the SKILSAW, and if your use or budget doesn’t justify the SKILSAW’s extra features, you’ll find a solid performer in the DeWalt DWE7491RS.

With 10-inch blades and 2.4 horsepower motors, these saws suit the construction site or higher-end home user levels. There are many similarities between these two saws, which we won’t dwell on. Instead, I’d like to focus on the eight differences I feel are worthy of a closer look. Depending on your particular use, such differences may be the points that sway you one way or another.

SKIL makes a big deal of their worm drive range of power tools, so what’s that all about, and does it provide any benefits over a direct drive motor as used by DeWalt?

A worm drive is a type of gearing where a worm shaft, looking like a large coarsely threaded bolt, drives a worm wheel. This gearing allows you to use a higher rpm motor slowed by the worm drive to give a lower rpm at the blade but with higher torque. Torque is the rotational power or force felt at the cutting tip.

The other benefit of this system is an increased cut depth. With a direct drive motor, the diameter of the motor reduces the cut depth available to you. A worm drive allows the motor to be mounted lower in the table saw body, increasing available cut depth.

So the SKILSAW SPT 99-1 series gives two benefits, a higher torque to cut through harder wood and a deeper cut at 90-degrees. Yet, as in life, all benefits come with disadvantages. The worm drive requires oil in the gearbox, and the gearbox adds complexity and weight.

The direct-drive motor on the DeWalt is lighter and less complex but sacrifices half-an-inch of cut depth, with reduced torque.

For me, the higher torque and cut depth on the SKILSAW win the day on this comparison.

The SPT99-11 has a rip capacity, using the fence, of 30-1/2 inches. The DeWalt gives you an extra 2-inches capacity at 32-1/2. It may not seem much, but believe me, if you’re regularly ripping large sheets, the width capacity on a table saw is a big deal.

If you’re on a job site, the last thing you want to be doing is jury-rigging a makeshift fence to allow you to make one necessary cut. Your productivity suffers, your accuracy, or both. Therefore, if you regularly cut large sheets, the DeWalt has the edge on this comparison.

While there is a difference between the two saws, it’s negligible. The SPT99-11 spins the blade at 5,000 rpm, and the DWE7491RS at 4,800. Two hundred rpm isn’t in it when discussing benefits. Torque at the blade is more important, and as we’ve already discussed, the SKILSAW has the edge there. So it’s a draw regarding blade rpm as far as I’m concerned.

SKILSAW SPT99-11 has slightly higher blade RPM but it’s not something that should affect your buying decision.

Now I can’t locate the bevel capacity for the DeWalt, other than a statement that the blade goes to 45 degrees. The SKILSAW specifically states adjustment angles from -1 degree to 47 degrees. Having a buffer of 1 to 2 degrees either way on your bevel capacity is essential when trying to miter joints, and so in the absence of any further data on the DeWalt, I’ll give this one to SKIL.

SKILSAW SPT99 has a wider bevel adjustment range at -1 degree to 47 degrees.

The DeWalt has a cut depth at 90-degrees of 3-1/8 inches, while the SKILSAW gives an extra 1/2 an inch at 3-5/8. The increased cut capacity of the SPT99-11 is due to the worm-drive gearbox, as discussed earlier. That’s a whopping increase on a measure where small increments count, giving a clear advantage to SKIL.

SKILSAW SPT99 has an edge over the DEWALT DWE7491RS with extra 1/2-inch of cut depth.

The SKILSAW SPT99-11 has them; the DeWalt DWE4491RS doesn’t. What are they? Designed to bolt to the riving knife, anti-kickback pawls are small serrated cams designed to allow you to push the wood under them in one direction while digging in and locking the wood against the tabletop if the wood tries to reverse its direction. A great safety measure if the saw blade bites and tries to kick back the wood toward you.

While not a deal-breaker if a table saw doesn’t have them, it’s a nice touch that SKIL includes them with the SPT99-11. I’ll give SKIL a tick for this inclusion.

SKILSAW SPT99 includes a set of anti-kickback pawls with the purchase while the DEWALT table saw does not.

The riving knife is that blade you see behind and following the saw blade’s contour. Used to mount the blade guard and anti-kickback pawls, the riving knife is actually designed for a more important function. It prevents the wood from closing on the blade when cutting, which, if that occurred, would jam the blade and cause a dangerous kickback.

The riving knife on the SKIL is bolted, although easily adjustable. The knife on the DeWalt is easily detached with a pull of a handle. I give marks to DeWalt for this initiative, as it’s well thought out and a useful feature.

Both saws have a foldable stand that doubles as a trolley to maneuver and store the saw when it’s not being used. I raise this topic as a point of difference because SKIL has incorporated a couple of nice design features into their foldable stand.

The first is the 16-inch wheels. If you’ve ever tried maneuvering a heavy weight on a trolley with small wheels, you’ll know that small bits of stone or wood will bring you to a halt very quickly. The SKILSAW SPT99-11 has a pair of wheels that will ride over the most uneven ground without complaint. While DeWalt doesn’t state the size of the wheels on their rolling stand, I’m guessing 6 to 8-inches maximum by the look of them.

The second design feature from SKIL that I like is the trolley handle that turns into a support to the left of the tabletop. That’s a nice touch, as it provides support when ripping down large sheets without the need for a trestle. While the DeWalt trolley base offers a similar use, the SKIL design is robust and appears to be better suited for height and usability.

On both these features, I give the points to SKIL.

I must admit to being impressed with the SPT99-11. It has many excellent features, which, while not immediately apparent, more than justify the slight price premium. The increased torque and greater cut depth, combined, give you huge flexibility in the types and sizes of wood you can cut.

The anti-kickback pawls, larger wheels, and more robust left-of-blade support wouldn’t on their own justify the extra cost. Yet, when combined with the increased torque and deeper cut, the SKILSAW SPT99-11 provides a suite of valuable features that outweigh the few dollars of higher price.

If SKIL can only increase that fence width rip capacity, I believe they’ll have an unarguable lead over all competitors. That aside, I give them full marks for a very nicely designed product.

The DWE7491RS from DeWalt is an excellent product, and I like it for its honesty. It doesn’t pretend to be more than it is, providing everything a home user could ask for with the addition of some nice touches.

The wider rip capacity and the quick attach/detach riving knife are helpful additions to an already solid product. If you won’t be moving your saw over rough ground, and are unlikely to be cutting hard timber, then the DeWalt provides everything you need at a more wallet-friendly price.

In my opinion, if the DeWalt came with outfeed capability and anti-kickback pawls while still retaining their price competitiveness, the decision between the SKIL and the DeWalt would get that much harder for home users.

Overall, we are looking at two excellent table saws. In such choices, the knowledge of the use to which you will put the table saw will influence your decision.

Will you have frequent movement on a job site while needing greater torque for cutting hardwood or a deeper cut depth? Then act now and buy the SKILSAW SPT99-11. In this package, you have an unbeatable combination.

Do you need to cut wide sheets frequently or need a good all-around performer at a competitive price? Then the DeWalt will do everything you need and more. Perfect for the first-time woodworker, the DeWalt DWE7491RS is the one to choose.