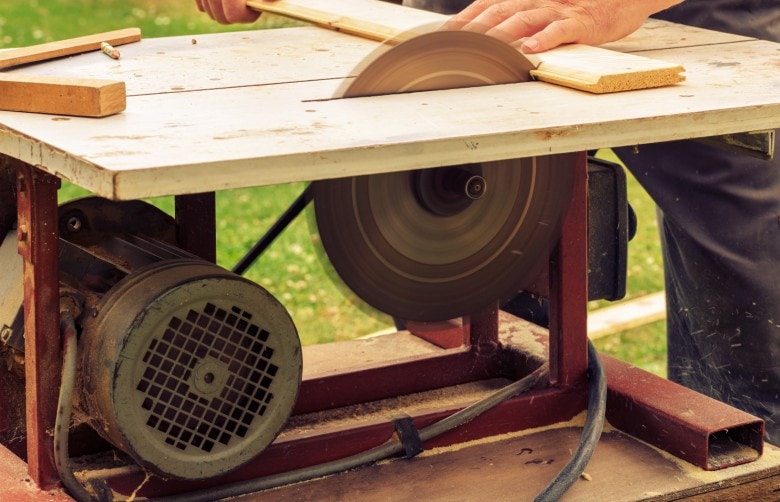 As you gain experience in the shop, you will begin to take on bigger and more complex projects. That will require investing in power tools that can increase your output and quality. A novice woodworker can feel overwhelmed by features and specs as they shop.

The last thing I want to see is a new hobbyist or DIYer be discouraged because they do not understand terms. You will feel confident with the table saw motor specs and drive types explained, so you can make the best purchase possible.

A direct-drive system uses an induction motor for power. That means the electric motor creates torque through electromagnetic induction. The name refers to the fact that your saw blade sits on an arbor connected to the electric motor.

One benefit gained by using a direct-drive electric motor is that there is no loss of power. A lack of extra components allows the saw blade to rotate on an arbor attached to the rotor. No loss occurs through belt or pulley transfer.

The design uses less-powerful electric motors. Manufacturers use one or two horsepower systems, and these will run on 120-volt electrical outlets (or top-tier battery platforms for cordless products).

You will not have to do as much maintenance on this type of motor design. Fewer parts should equate to fewer breakdowns. That makes the direct-drive electric motor more durable than a belt-drive design.

Direct-drive electric motors take up less room than a belt-drive design. That is why you will find that it in smaller table saws (benchtop and job site table saws). The tighter space between the saw blade and motor housing will collect more debris, though.

Belt-driven table saws also use an induction motor. A winding stator creates a magnetic field that generates torque. As the name suggests, this motor type uses a V-belt and pulley system between the electric motor and the saw blade arbor.

A pulley is attached to the rotor, which turns the V-belt. The belt turns a pulley that is attached to the saw blade arbor. You will find motor sizes ranging between three and five horsepower, with 240-volt outlets required for the higher end of that range.

There is more room around the saw blade since the arbor is separate from the electric motor. That space, along with the increased horsepower, makes the belt-drive design produce more roque. You will cut through hardwoods and thicker stock easily when compared to a direct-drive design.

A belt-drive table saw will not build-up as much debris around the motor as it is farther from the saw blade. Less cleaning somewhat balances out the belt inspections and replacements you will occasionally do.

The design takes up more space with the V-belt and pulleys. That limits them to larger table saw designs (Cabinet, contractor, or hybrid models).

If you are new to woodworking, or power tools, you might be caught by surprise by electrical terms. The following words are significant specification terminology that you need to know.

The phrase originated during the Industrial Revolution to compare how many horses a steam engine could replace. It has been used since that time to describe power outputs for electrical, mechanical, and steam power. Horsepower is considered an Imperial unit of measurement, and you find electric motors rated in horsepower or watts.

Technically, one horsepower is equal to 746 Watts. It is a term that you will find in the North American market. Outside of the United States, tools rate in Watts or Kilowatts.

The horsepower rating represents maximum output under ideal conditions, which often include the blade spinning without friction from a cut. You will see this described as “no-load conditions.” Realistically, you will never reach maximum horsepower plugged into a standard 120-volt outlet (a 240-volt outlet provides enough power to achieve near maximum output).

How much horsepower do you need? For a DIYer or casual woodworker, 1.75 horsepower is plenty. You will want a table saw with a higher rating if you use it often or work with hardwoods that are more difficult to cut. Construction or manufacturing settings will need a table saw with three or more horsepower.

Amperage is a rating that indicates the current flow of a power tool like the table saw. It is a base unit in the International System of Units (SI), with a similar definition across the globe. That means a listed amp rating is the same for all markets and manufacturing locations.

For a table saw, amp rating indicates how much current can flow into the electric motor indefinitely without overheating or damaging components. The UL listing is better for highlighting how effectively it will stay cool instead of power indication.

Table saw products often range from 6 to 16 amps or more. Multiplying amps by voltage will give you the wattage rating of the table saw. Manufacturers will list what type of outlet will power the tool (120 or 240 volts), so you will only need to verify that the circuit the table saw plugs into can handle the amps drawn by the motor.

Voltage is a standard form of measurement that indicates the tension that pushes electrical current. In other words, voltage is the pressure in an electrical circuit. Its basic unit is a Volt (V).

Cordless tools are rated by voltage and indicate the pressure pushed through the table saw’s electrical circuit when it is on. Corded products are listed as 120 or 240 volts, indicating the type of outlet required.

Remember that 120-volt table saws will run less than maximum, and 240-volt products will operate closer to full motor potential. Cordless designs will drop in power output as the battery pack drains.

The term RPMs is an abbreviation for Rotations Per Minute. Manufacturers list this as the number of revolutions a table saw blade makes, and it gives you a general idea of the blade’s speed.

The rating is under “no-load” conditions, so you may find smaller motors struggle to meet the rating during a cut. Large electric motors or higher amperage ratings tend to perform closer to spec here.

A good RPM range for a table saw runs between 3,000 and 4,000. Some electric motors rate much higher, but that does not necessarily indicate the speed of the arbor. Higher speeds cut faster, but they will also heat the saw blade more (reducing its lifespan).

Let your next woodworking project challenge you, not the terms used to describe your table saw’s capabilities. After all, power tools are supposed to increase the fun of woodworking!