How does a random orbital sander work and how to use it? (8 tips) 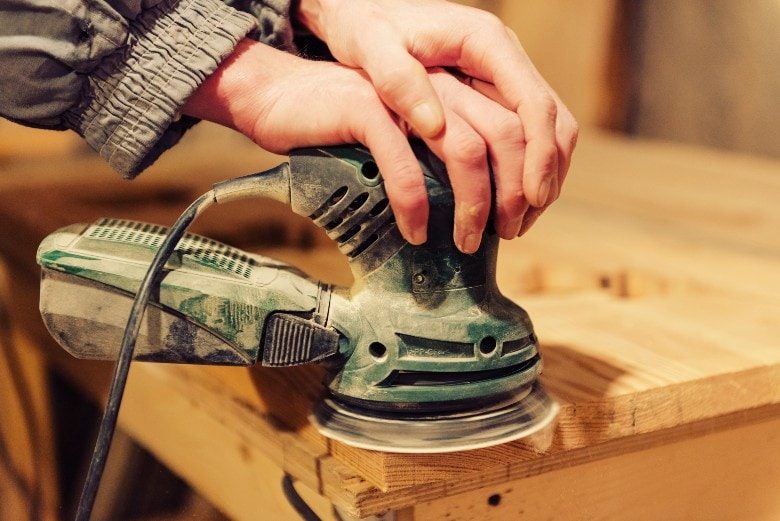 Once the workpieces have been cut or already fastened, it may seem that the project is done. However, the quality of woodworking projects will often be judged superficially by layman’s eyes. That is why it is important to make sure to put the finishing touches by sanding the project to a smooth surface.

How to Use a Random Orbital Sander

1. Dress for the Job

Like with any power tool, make sure to wear the proper gear and attire when using a random orbital sander to prevent injury or irritation. For “unique” aspects, a mask that forms a tight seal around the nose and mouth is recommended as random orbital sanders generate significant amounts of dust– even with a vac attached.

Outside of the mask, most of the attire and equipment are pretty standard for power tools like safety goggles– though this is more for dust than anything. Also, make sure that any loose clothing is pulled back and do not wear any jewelry like a wedding band or wristwatch.
Finally, anyone with long hair needs to make sure it is pulled back and kept away from the random orbital sander.

2. Use the Right Sandpaper Disc

This is almost certainly the most important part of using a random orbital sander for the most effective results, even if it does not actually occur during the use of the tool. There are 19 different sandpaper grits, though most jobs involving an orbital sander will rarely use sandpaper with a grit exceeding the low to mid-200s.

That said, there is still a world of difference in the amount of material that 40-grit sandpaper takes off compared to 200-grit. On top of that, the different grits leave a different finish to the surface with rougher sandpaper leaving a rougher finish and generally best reserved for initial sanding.

As mentioned prior, random orbital sanders generate significant amounts of fine dust– to the point where a mask is necessary to prevent irritation or serious health issues. The best random orbital sanders come with built-in dust extraction systems, but that can only go so far and only allows for so much dust before it loses its effectiveness.

Woodworkers generally use a random orbital sander to increase the speed of sanding in the first place, so there is no need to accelerate that further and potentially mess up a workpiece. Sanding at a relatively slow, steady pace produces the best results, though this may differ slightly depending on the grit of the sandpaper.

5. Don’t Push on the Sander Too Hard

This is likely one of the more difficult parts of using a random orbital sander, and can even still trip up experienced woodworkers from time to time. While some pressure needs to be applied to prevent the tool from flying all over the place on its own, too much pressure can bog down the motor and cause long-term damage to the tool.

On top of that, too much pressure interferes with the different sanding actions and can cause some of the problems the random orbital sander is meant to solve in the first place. Finally, pushing too hard can lead to an uneven surface where some parts of the workpiece are sanded down more than others due to an inconsistent pressure application.

However, this give, coupled with the circular shape of a random orbital sander’s sanding surface, can lead some to try and sand with the edge of the sander. While some extremely skilled woodworkers might be able to pull this technique off, those who could are far more likely to sand that bit of the workpiece with another tool or by hand.

It’s understandable to try and get the most out of a sanding pad, especially considering that random orbital sanders and their discs are more expensive than traditional models and their pads. However, this is a mistake as it decreases the effectiveness of the sander, in general, and can cause bigger problems down the road.

On the positive side, following the other steps on this list will at least prevent the sanding disc from losing grit unevenly which would otherwise cause problems. Just make sure to keep the used sanding discs around as they can still be used to sand down corners and edges– which should not be done with the random orbital sander.

Yes, the random orbital sander should ostensibly take care of most of the work, but there are plenty of sanding jobs it is not suited for. A perfect example of this is corners and edges where even hitting those spots with a random orbital sander for a couple of seconds can completely round them off.

On top of that, interior corners and edges also present issues for the random orbital sander’s circular pad, and simply trying to force it can gouge the perpendicular workpiece’s face. Finally, a hand finish allows for a better surface with special attention paid to spots that need it while avoiding areas that are already done.

Random orbital sanders are not difficult tools to get the hang of, but they still require proper technique to ensure the best results. With their unique sanding action, random orbital sanders avoid some of the pitfalls their predecessors fall into while speeding up the removal of material.

So long as the proper speed, pressure, and positions are used, random orbital sanders can cut sanding time down drastically without ruining the face of woodworking projects.