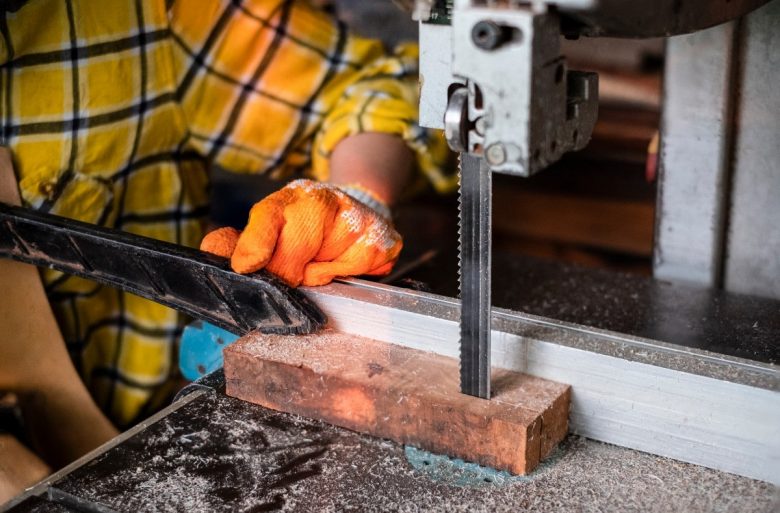 Looking for a quick answer? WEN 3966T is the best 14-inch band saw you can get. Keep reading to find out why.

Whether you’re an avid hobbyist or a professional woodworker, a band saw can be one of the most useful tools at your disposal. Figuring out which one is best can be challenging, though.

In this article, we will review five of the best 14-inch band saws highlighting what each one does best. You will also find a helpful buyer’s guide that will explain what makes a good band saw. 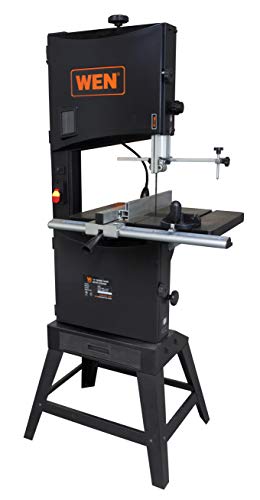 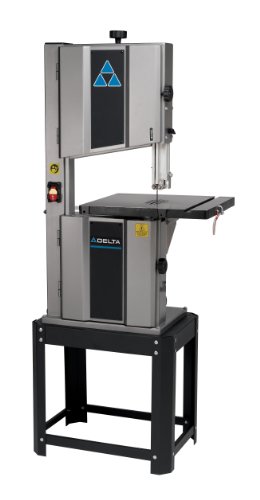 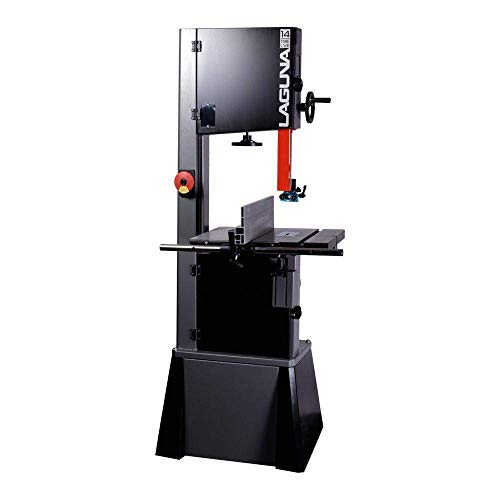 With cutting power, the two most important qualities to consider are the horsepower and the amps drawn, though these two factors influence the cutting power differently. The horsepower measures the maximum cutting power achieved and the initial bits while the amps give you an idea of how the band saw cuts under load.

The build quality of a band saw might be more important than the cutting ability as you can often take more time and care to achieve a difficult cut, but little will improve poor build quality. One thing to look at with the build quality is the blade guides to make sure that the cut remains precise and on track.

While quality blade guides help ensure the blade does not deviate, the materials used to accomplish the same thing for the workpiece. Cast-iron is by far the best material to use for this purpose as it absorbs vibrations that can add minor imprecision to the cut with the table and wheels being especially important.

There are loads of potential extra features the best band saws can include with some being more functionally useful than others. For example, any type of tool that increases the precision of a band saw should be seen as a must-have with examples including a miter gauge or fence– especially a hi-lo fence.

Outside of that, other qualities that can make life easier include a blade tension guide as well as an easier blade changing system. Finally, quality of life features like a work light can make using the band saw significantly easier while high-end dust ports help keep your workspace clear from sawdust or other debris.

Wen may not be the most well-known company on the list, but it is quickly becoming one of the more reputable manufacturers of consumer-grade power tools. It also does not hurt that the company has been around for close to 7 decades, but the consumer-grade market still limits some of their products.

That said, this 14-inch band saw does a pretty good impression of a mid-tier model with more power than some of the professional-grade competition. For starters, the WEN 3966T band daw comes with a reasonably powerful motor that puts out 1 ½ hp and pushes 9 ½ amps to maintain decent power through the cut.

Keep in mind, this is not an exceptionally powerful 14-inch band saw, but it also does not hurt that it cuts at a maximum blade speed of 3280 FPM for hardwood. As if that were not enough, the WEN 3966T band daw is one of a few models reviewed that comes with 2 speeds with a minimum of 1480 FPM for cutting softer materials.

On the other hand, this 14-inch band saw is surprisingly expensive and actually prices itself out of the traditional consumer-grade band saw market. Though, the WEN 3966T band saw more than makes up for this by coming with a litany of extra features like a miter gauge, fence, and circle guide– the only entry with that last one.

One potential pitfall of this 14-inch band saw is its resaw cutting capacity which maxes out at 8 ⅞”– though this too is better than some mid-tier models. However, when you consider that the WEN 3966T band saw comes with a flexible work light as well as a 3-in-1 dust port suitable for any standard vacuum, it is not hard to see why this option sits at the top of the list.

JET actually got its start making airline equipment and tools, but this inauspicious origin allows JET to produce high-end power tools for the average person. When you need to work on aircraft, working in a small shop is no problem, especially when you have more than 50 years of experience.

That said, this 14-inch band saw is better understood as a mid-tier option due in part to its cutting capabilities which fall a bit short for professional purposes. For starters, the JET 708115K JWBS-14CS band saw’s motor is a bit underpowered, generating only 1 hp and pushing only 10 amps.

Though, Jet more than makes up for that with one of the better builds you will find that uses solid cast-iron for both the table and wheels to significantly reduce vibration and increase precision. As if that were not enough, the JET 708115K JWBS-14CS band saw also used computers to balance its wheels for even more precision.

To keep this train rolling, this 14-inch band saw comes with graphite-impregnated blade guides on bearing rollers for a smoother cutting action. Unfortunately, that mid-tier quality rears its head again as the JET 708115K JWBS-14CS band saw is tied for the smallest resaw capacity on the list at only 6”.

In terms of workpiece materials, this 14-inch band saw sits in an odd position with a 3000 FPM blade speed that is fast enough for most hardwoods but no other setting for softer materials. On the other hand, the JET 708115K JWBS-14CS band saw boasts one of the better bevel ranges found with 45-degrees to the right and 10-degrees to the left.

Delta is easily the most experienced company reviewed with over a century of experience under its belt and a storied history that includes some of the most iconic power tools on the market. That said, Delta runs the gamut from mid-tier to light industrial models with this entry falling under the mid-tier moniker.

Of course, if you do not need an extremely large or powerful band saw hogging the space in your workshop, then this 14-inch band saw might be perfect. That said, the Delta 28-400 band saw is the all-around weakest model reviewed with a motor that only produces 1 hp and pushes 9 amps– both the lowest on the list.

To make matters worse, this 14-inch band saw cannot handle larger workpieces with a maximum resaw capacity topping out at 6”– also the lowest reviewed. However, the Delta 28-400 band saw is still an excellent deal as it is an inexpensive model that offers plenty of value for smaller operations.

One of the better qualities of this 14-inch band saw is its blade speeds, keeping in mind that this is one of the few models reviewed that comes with multiple speeds. However, the Delta 28-400 band saw offers the second-fastest blade found at 3,340 FPM for hardwood and 1,620 FPM for softwoods and plastics.

This 14-inch band saw also boasts a solid build with a cast-iron table that reduces vibrations to increase cutting precision– though the table is a bit small. While the wheels may be aluminum, combine their rubber coating with a 5-point precision ball bearing guide system for even more precise cutting.

JET makes another appearance on the list, but this time instead of hitting the mid-tier market it goes for the professional-grade with a powerful entry. Specifically, this 14-inch band saw comes with the second most powerful motor reviewed, generating 1 ¼ hp and pushing an impressive 14 amps.

As if that were not enough, the JET JWBS-14DXPRO band saw also offers multiple speed settings, so you can cut different types of materials equally well. Granted, the blade speeds are not the best for either aspect, but a maximum blade speed of 3000 FPM and minimum blade speed of 1500 FPM is solid.

One thing to consider, however, is that this 14-inch band saw is somewhat expensive without necessarily offering significantly more than other professional-grade models. However, professionals will love that the JET JWBS-14DXPRO band saw boasts an extremely large 12” resaw capacity.

This 14-inch band saw does not have any major flaws, though, with the biggest issue being customer service should you run into a problem while still covered under warranty. Still, that should not be much of an issue given that the JET JWBS-14DXPRO band saw uses cast-iron for the table and wheels while employing a ball bearing guide.

Laguna Tools is actually the least experienced company reviewed, though that is not saying much since it still has close to 40 years of experience under its belt. Even better, the Laguna Tools MBAND1412-175 band saw offers an excellent professional-grade option with all of the trimmings.

For starters, this 14-inch band saw packs some serious power with a motor that generates a list-leading 1 ¾ hp and pushes a maximum of 14 amps. However, the Laguna Tools MBAND1412-175 is also one of the few models reviewed that can run on 220/240 voltage for more consistent power delivery.

One potential issue with this 14-inch band saw is its blade speed– specifically that it only runs at a single speed, removing the ability to cut softer materials. However, you should have no issue cutting even the hardest of woods thanks to a blade speed that feeds at a blistering 3600 FPM.

Beyond that, this 14-inch band saw also comes with a work light and hi-lo fence to couple with the cast-iron table and wheels for additional stability. Still, the Laguna Tools MBAND1412-175 puts precision above almost everything else with a worm gear drive and magnetic ceramic blade guides for a smoother cutting action.

The Best of The Bunch

In the end, the best 14-inch band saw will heavily depend on your level of woodworking with professionals needing one of the two options at the end of the list. But if you just need something quick, easy, and capable, then the WEN 3966T 14-inch band saw has everything you need and then some.

While not the most powerful, this 14-inch band saw still provides more power than most in its class and even offers a slightly larger resaw capacity than expected. However, it is the various extra features like numerous guides, a work light, and versatile vac port that puts the WEN 3966T band saw over the top and the recommended option.