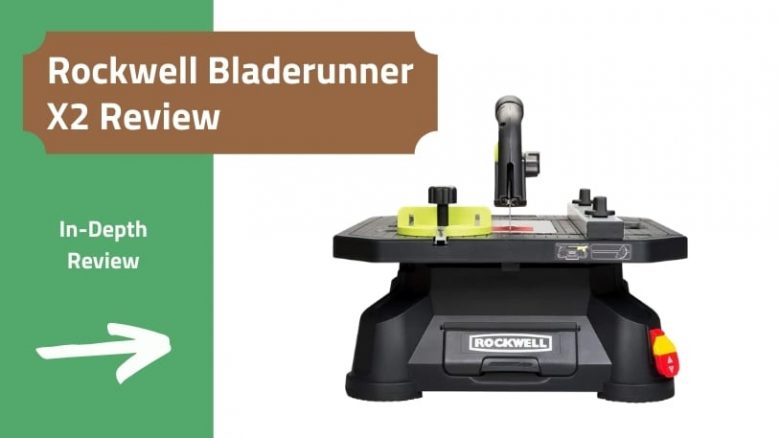 In this review, we’re looking at a slightly different table saw, namely the Rockwell RK7323 BladeRunner X2 Portable Tabletop Saw. Different because this is not your usual saw with a revolving circular blade. The Bladerunner is more like an inverted jigsaw, using the same blades as a jigsaw, but with many of the features found on your more traditional table saw.

I’m always on the lookout for products that make my woodworking easier or safer. When I was renovating houses about 20-years ago, I used tools that weren’t designed for the specific task I needed to complete. I ‘made do’ because I had no spare money, nothing else capable, and the job needed to be done. Sometimes those attempts ended well, other times less well. I still bear some of those scars. That’s why I’m always on the lookout for new products or products that approach a problem in a new way.

Over the years, I’ve believed that the more things a tool tries to do, the less well it does each thing. So on first sighting the RK7323 Bladerunner, I was skeptical. It’s like a scroll saw, but not. It’s like a table saw, but not, and it’s like a jigsaw, but not quite. However, on balance, I grudgingly admit that Rockwell has designed a niche product that will provide you considerable versatility and efficiency if you’re looking for a Swiss-army-knife-equivalent cutting tool.

I’ll run you through the design and highlight the different tasks the RK7323 can manage, and we’ll discuss its capabilities compared to the various tools it’s trying to replace.

Read on, and the next few minutes will help you decide if the Rockwell RK7323 Bladerunner deserves a place in your workshop.

Included In The Package

On looking at Rockwell’s advertising for the RK7323, the saw appears aimed at tradespeople who might have a range of cutting to do when renovating or building a house. With the correct blades fitted, you can cut ceramic tiles, metal, plastic, and wood.

Overall, I think Rockwell is onto a winner with this saw. I’ll hasten to add that the RK7323 is not a serious woodworking tool for turning out accurate or fine work. Yet, as a light general purpose saw for small cuts on multiple material types where accuracy is not critical, it’s a convenient saw with a small footprint that offers a versatile solution to a couple of different user types.

Let’s assume you were renovating your bathroom; this saw would be ideal for all those small jobs that crop up. You can trim a copper pipe before fitting it, shape up a piece of timber and cut a ceramic tile to fit, then trim an aluminum extrusion to go around a shower cubicle. Yes, you could do all that with a jigsaw, but the Bladerunner is arguably more stable, and therefore safer.

Or perhaps you’re a hobbyist who needs to cut shapes into a piece of plywood or PVC pipe. For occasional use, the RK7323 is great to tuck away into a corner, bring out, do a quick blade change, do the cut, then put it away again.

Now we should talk about the price. If you want this tool as a glorified jigsaw, I’d suggest you buy the jigsaw, as it would be a third of the price of the Bladerunner X2. If you want a scroll saw, the RK7323 is slightly cheaper, but it has its limitations and is not as accurate as a scroll saw, and you can’t manage the tight turns and intricate detail. If you want a table saw, the Bladerunner X2 is considerably cheaper but struggles with material approaching 2-inches thick, so it’s limited.

Yet, if you want a true all-rounder that does a little bit of all those things on a small scale, then I’d say the price is about right.

Let’s look at the great, the good, and the less desirable features of the RK7323 Bladerunner X2.

Keyless blade change is a key design feature that makes the Bladerunner desirable. Coupled with that feature is an onboard blade storage capability, allowing you to select the appropriate blade, make the change, and get on with your work. Rockwell claims that with practice, a blade change can take under 3-seconds.

Using standard 4-inch T-shank jigsaw blades, you can maintain a wide selection of blades with different teeth-per-inch (TPI) and material cutting ability to ensure you have the blade for any eventuality.

Bear in mind, however, that jigsaws are not like bandsaws. They do not have great accuracy, and the blades tend to bow, particularly when under pressure, which can lead to angled cuts.

The Bladerunner X2 weighs in at only 15 pounds, so it’s a featherweight. Rockwell makes much of its portability and shows it being pulled out of the back of trucks. There’s much to be said about such a lightweight, convenient tool, yet that lightness brings a few cons.

The Bladerunner is largely plastic, which accounts for the light weight. However, I wouldn’t give much for it surviving in the back of a truck for long. Something this light and flimsy won’t take any hard knocks, so if you wish it to last, treat it with care and possibly box it up each time you need to transport it.

The lack of weight shows itself in another way. When you are cutting wood, you’ll find the whole saw begins to move away from you due to the pressure you need to apply to the wood. If you look at the video that Rockwell put out showing the saw in use, the saw begins to move, and the operator has to use his left hand to hold the saw while using his right to guide the wood.

Like a full-size table saw, the RK7323 has a plastic blade guard that doubles as a hold-down foot. It adjusts down onto the surface of the material you are cutting and acts like the footplate on a standard jigsaw. It also has a fitting for a dust extractor hose.

The riving knife is the device that holds the guard/hold-down mechanism while being slim enough and sharpened to also act as a riving knife, keeping the cut open and preventing it from closing behind the blade and pinching it. On reviewing several owners’ comments, no one appears to have any issues or concerns with either the blade guard or the riving knife.

As in a table saw, the Bladerunner has a small rip fence to guide longer rip cuts. Unlike most table saws, the adjustment is made by two knobs at the front and rear of the fence. Such a mechanism means that you will need to ensure the fence is parallel before cutting, which is unlikely to be accurate.

The miter gauge allows cutting angles from 0 to 60 degrees. The major gripe users have regards the play in the slot that the miter gauge runs in. With such movement, accurate miter cuts will be difficult to achieve.

I must admit, I started out being very skeptical about the Rockwell RK7323 X2 Bladerunner, and it struck me as an expensive toy without much practical use. In reviewing the saw, I’ve recognized that Rockwell has probably found a very narrow and clever marketing niche.

It’s mildly inaccurate, so you need to buy a scroll saw or a table saw if you want to complete fine, detailed work. Yet, it’s fine for rough cutting to size or shape if you finish the cut by sanding or filing.

It’s limited in its cut capability, so if you’re cutting over 1-1/2 inch material, it simply won’t cope. However, recognize its limitations and use gentle feeds while exercising some patience, and you’ll manage.

Yet, if you need a general-purpose saw, a cross between a hacksaw, a scroll saw, and a small table saw, this fits neatly into that category. Why buy several tools that get used once a year when the RK7323 will meet most of your needs. The Bladerunner X2 is a great little saw to keep tucked away in a cupboard for homeowners with infrequent use or very specific requirements.

If you’re a tradesperson who wants one tool to cut a wide variety of small materials, the RK7323 obviates your carrying four tools and will admirably meet 90% of your requirements.

I’ve become a bit of a convert to the Rockwell RK7323 X2. It’ll never find a place in my arsenal of fine tooling, but as a convenient, general-purpose multi-use tool, it fits the bill nicely. At the price, it’s a great buy, and I recommend it.